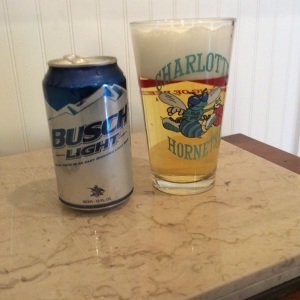 The saying “Bless Their Heart” is usually followed by some explanation on how that person or persons might fall a little short of expectations. Examples might include John works hard but “bless his heart” he still is not the sharpest knife in the drawer. Another example is Sally never misses a Sunday at church but “bless her heart” it looks like Helen Keller picks out her clothes.

I got to see some special friends over the Thanksgiving Holidays. They heard about my quest to drink a unique beer each day and they went out and found me a beer I have not had in 2014. They joined us for Thanksgiving Dinner and left me that special beer. We had a great day having them part of the holiday.

Joey and Janet Beckett are those friends and they live in Charleston SC. Janet is a fanatical University of Alabama fan football fan so last night’s 55-44 win over Auburn was special to her. The Beckett’s home town of Charleston has some fabulous breweries like Southend Brewery, Palmetto, Westbrook Brewing, and Holy City. The beer they brought me didn’t come from one of those breweries. BLESS THEIR HEARTS they brought me a pale lager from Anheuser Busch called Busch Light. This beer contains 4.1% ABV.