One thing I have learned is that good friends have other good friends. This is a series of stories about friends of my friends.  The post below is the story on a friend of a friend for January 23, 2015.

In 1989 I was the Head Basketball Coach at UNC Pembroke and my assistant coach Dr. Scott Colclough was leaving to accept a position on the faculty at NC A&T. I knew who I wanted to hire right away. It was someone I didn’t really know well but I knew his work. His name was John Haskins and he was the assistant coach at Gardner-Webb University in Boling Springs, NC. John had just recently got married and I met him and his wife Kelly in Rockingham, NC. We discussed what it would take to get the Haskins to come to UNCP. We found some things we could agree on and I not only got the best assistant coach I ever had but a lifetime friend.

When John joined our program he immediately made us a better team and me a smarter coach. He had enthusiasm, great work ethic, was an outstanding teacher of the game, funny, and worked very hard at recruiting. He also was willing to take on the other responsibilities that came with the job. Those extra’s involved teaching nine hours of college classes and serving as Head Men’s Tennis Coach.

In John’s first year his influenced helped UNCP win the 1990 Carolinas Conference Tournament and defeat NAIA power Pfeiffer three times. The next year UNCP established a school record by going 27-5 and again John as assistant coach deserved most of the credit.

In 1992 I got the opportunity to become the Head Coach at Winthrop University and John was elevated to Head Coach at UNC Pembroke. John is currently the Women’s Head Coach and his teams are still wonderfully prepared.

In addition to coaching and recruiting John and I did play golf in the summers. I was a hack and John was an excellent golfer. To this day locally he is still one of the top golfers in the county.

In the summers John and I would ride to the golf course early in morning,walk 18 holes, and then go to the office. John would play more golf than me and eventually he became a member of Pinecrest Country Club. Pinecrest had part of their course designed by Donald Ross and is located in Lumberton NC.

Once John joined Pinecrest he got to know just about all the members. One of those members he didn’t know at first but later got to know him much better. That gentleman was Carr Gibson.

Carr Gibson was a fascinating man and there is a good story on him at the link below. He died in 2008 at the age of 92 and up until age 78 he went to work every day. He loved horses and was benefactor to a lot of great causes in Southeastern North Carolina. As I said above he was a man with wealth but everything he did was with modesty. Carr also had a fabulous family and I am happy to say that my family and his family have developed some friendships especially one of my sons and one of Carr Gibson’s grandsons.

Carr Gibson also served two terms on the UNC Pembroke Board of Trustees and was a great friend to one of the UNCP Chancellors Joe Oxendine.

The Friend of the Friend-CARR GIBSON 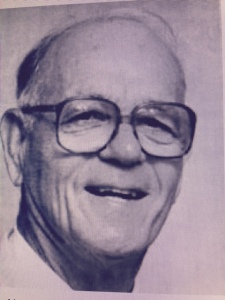 One Friday in the summer of 1990 Dan Kenney and I got to Pinecrest before the afternoon tee time rush and began walking 18 holes. When we got to the 3rd tee we could see a golf cart leaving the pro shop and headed to us without playing hole one or two. We walked out to our tee shots in the #3 fairway and could see a twosome waiting to tee off.  Dan and I commented that they must be in a hurry not even playing holes #1 or #2.

Well for the rest of the front nine these two in the golf cart were racing behind us as we walked as fast as we could. We were pretty frustrated coming up the 9th fairway and decided we would let them play thru on #10 since they were in such a hurry. We commented what assholes those two must be for skipping holes and rushing the people in front of them.

We putted out on #9 and walked straight to the #10 Tee Box where there was a broken down golf cart located at the back of the tee box behind the blue tees. We sat in the broken cart with our bags propped against the back. We waited about 5 minutes and the twosome in such a hurry came up to the #10 tee box. We immediately told them to go ahead and tee off. We will go after you.

One of the guys in the twosome was Carr Gibson and as he walked to the white tees he looked at Dan and I sitting in the cart and said thanks for letting us tee off. He apparently could not figure out we were the two guys in front of them the last 7 holes that he was rushing. He then validated he didn’t recognize us when he asked “have you seen those two assholes walking out here on a Friday Afternoon”?

Dan told Carr they must be in the 19th hole because we haven’t seen any assholes walking. They drove off and we were laughing hysterically. We let them clear the 11th tee and we got off the broken cart. We proceeded to be the two assholes walking down the fairway on a Friday.