One thing I have learned is that good friends have other good friends. This is a series of stories about “friends of my friends”. The post below is the story for May 27, 2015.

I sometimes realize that my friends that demonstrate the highest leadership qualities and are the most successful also are the most unassuming. Don’t confuse unassuming with a lack of friendliness or not being interesting.

Jerry Johnson is a friend of mine who fits the bill on the above description. Jerry is a leader, he is successful, he has a servant heart, and he is interesting. Jerry never is looking for credit or recognition when he serves others. I love to engage him in conversation because he is one of those people who still possess curiosity about life. When you talk with him if you listen you will learn something that makes you think.

Jerry likes certain things to me that make him unique. He loves to watch college soccer live. He is not beyond getting in his car and driving from Lumberton to Wake Forest to watch NCAA Division I soccer. He still firmly believes in Sunday afternoon naps. He loves to read and his personal library is pretty impressive. He is also a very good golfer and nothing gives him more joy than playing a round of golf with his son Trevor.

Jerry is from Rowland, NC but today he lives in Lumberton, NC. He comes from a family that has a deep history in the automobile business. His uncle and dad both were car dealers. Jerry as young man did not think that was going to be his career path in fact he was set on becoming an anthropologist.

Jerry earned his undergraduate degree in anthropology from Wake Forest University in 1976. He began graduate studies at the University of Nebraska but returned home to work with his father, James Johnson, at Rowland Motor Company in Rowland, NC. That business experience let him to eventually him becoming the owner of car dealership in Lumberton. He is former owner of Jerry Johnson Chevrolet, Oldsmobile, Pontiac, Inc., of Lumberton which today is Lumberton Chevrolet.

The list of things that Jerry is involved with is pretty impressive. He has served since 2004 on the Southeastern Health Board. He has also been chair of that board.  In addition to serving on that board, Jerry has served on the SRMC Foundation Board and has supported several local events and organizations, including Relay for Life, Chevy to the Levee, Communities in Schools, Exploration Station and others. I along with several others in the community most notably Maria Parker helped start the Robeson Road Runners. There is no one person more responsible for the success that the Robeson Road Runners have had in our community than Jerry Johnson.

Jerry did more than just contribute sponsorship dollars to the Robeson Road Runners when it was just getting started. He was the sole reason a second event called the Chevy to the Levee got added to the Robeson Road Runners lineup. That event was held at Luther Britt Park in Lumberton. Jerry went all in assisting the RRR. He didn’t just write a check he had his entire dealership take it on as a team project. What a team it was. The first events saw almost all their employees assisting with set-up, registration, and awarding prizes.

Jerry and his wife Von have two grown children Trevor and Kelsie. Jerry will be the first to tell you that his best friend is his wife Von.

The Friend of the Friend-VON JOHNSON 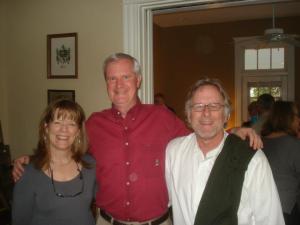 A couple of great people

If you are lucky in your life you will meet a couple as nice as Jerry and Von Johnson. Von Johnson grew up in Lumberton, NC and epitomizes to me what caring about others is all about. She like her husband Jerry does not ever want to have the spotlight shined on her for her service but she is always helping others. I often cringe when I think what our community would be like if it wasn’t for people like Von Johnson.

Years ago when our youngest son was in grade school Von was there volunteering. She was a tremendous advocate for fitness and the impact it could have on young people as a member of the Robeson Road Runners. She has supported a number of initiatives with the Southeastern Foundation that relate to children. She and Jerry both have supported Exploration Station a hands on children’s museum in Lumberton.

If the United Way or our church is having a day of caring you can usually find Von helping in some shape or form. Building handicapped ramps, collecting food, painting a home, doing yard work, or delivering meals Von is there.

Von is a mom that has raised two children into well-mannered, appreciative, and respectful young adults. Often times her two children Trevor and Kelsie were alongside their parents serving others.

Jerry is lucky to have Von. Our community is fortunate to have both of them and I am lucky to call them friends.