One thing I have learned is that good friends have other good friends. This is a series of stories about “friends of my friends”. The post below is the story for June 29, 2015.

Friends have all different types of talents. If you are smart you try to figure out what each of them can do better than you. If you pay attention to their talents you become better. Our friends may not be able to give us their gift or even teach it to us. Sometimes all we can do is to appreciate their unique talent and that by itself is a gift and it can enrich our lives. Appreciating others is actually making you better.

That happens for me most Sundays at church when the worship service features the talents of several musicians and singers. Several of my friends are part of that group including Les Noble. Les plays the guitar and is a featured vocalist in the First Presbyterian Church “Praise Band”. Les is a business owner in Lumberton, NC. His company Noble Self Service Storage provides convenient, self-storage space that is clean, secure and affordable. He has several locations in around Lumberton, NC.

Les graduated from high school in Lumberton, NC and attended Wake Forest University. Les is married and he and his wife Kim have three grown children Jonathan, Sarah, and Samuel. Les and his family have always been a group of people that care about the community they live in and the people around them. 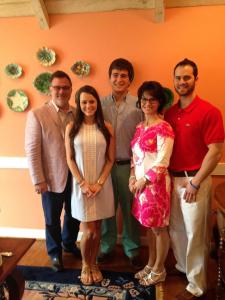 Les is a Kiwanian that has spent lots of time serving children in Robeson County. He also uses his special talent as a musician to serve our church. He is a fabulous singer and guitar player. He also has been known to play the mandolin on occasion.

Les is an outdoorsman and loves to be part of the woods. I have a sneaking suspicion that if Les could limit his shopping to guitar shops and Cabela’s for the rest of his life he would die a happy man. He is one of those men that definition of dressed up consists of jeans and boots.

Les several years ago migrated to our church and that decision has been a gift to me. Les won’t be able to pass on his gift of singing or playing guitar but every Sunday he gives a gift when he plays in church and let’s me listen to his rich baritone voice. A friend of Les who is by his side each Sunday playing the guitar and singing is Townsend Link. 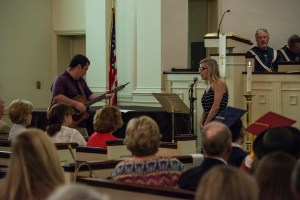 Rhythm and Blues and Church Pews

Townsend Link is the son of Presbyterian Minister so being connected to the church is part of his upbringing. Townsend is also a man who has interest in some extreme water sports like skiing and wake boarding. He works at White Lake Marina in White Lake, NC a small resort community in Bladen County NC.

Townsend has also served our church by playing a big role with our youth. He has led them on mission trips and other adventures. He is a dad with two small children at home and those roles of being a husband and dad led him to break away from another adventure he had.

Before becoming part of First Presbyterian Church Praise Band Townsend had previously been the bass player and singer for a great North Carolina Band called the Blackwater Rhythm and Blues Band. You can go to the link below and see Townsend singing a song when he was with the group.

So the next time you see a owner of business or man working at marina ask yourself what can they teach me. You might be surprised I was.

Learning is knowledge transfer to brain known as learnography