One thing I have learned is that good friends have other good friends. This is a series of stories about “friends of my friends”. The post below is the story for July 26, 2015.

The last two days my wife and I made a quick trip from North Carolina to New Jersey to visit with my sister and brother. On Friday night we spent the night in Schooley’s Mountain, NJ at my brother’s pictureque red farmhouse which dates back to 1820.

Schooley’s Mountain, NJ for those that are geograhically challenged is located in Morris County and is an unincorporate part of Washington Valley, NJ. This part of northern New Jersey was once settled by Lenni Lenape Indian and is named for a prominent family named Schooley who owed vast tracts of land in the 1790’s. My brother’s house sit on top of a mountain that rises about 600 feet above Long Valley,NJ. This part of Jersey does not mirror anything like the images you may have seen on the Sopranos. This is country living where my broher and sister-in-law Marcee will routinely see deer, fox, and an occasional black bear.

Pat and Marcee have three children; Meagan who lives in New York City, Eric who lives Philadelphia, and Dottie Schur who lives in Pottstown, PA.

Dottie and her husband Dave have a daughter named Josie who I profiled on May 26, 2015.

Dottie and Dave are expecting their second child in December.

Dottie is a beautiful young woman and loving mother. One of the things I look forward to each day is see Dottie post a recent picture of Josie. Dottie is a graduate of Bloomsburg State University (PA) and got her degree in education.

Her best friend is her husband David Schur.

The Friend of a Friend-DAVID SCHUR 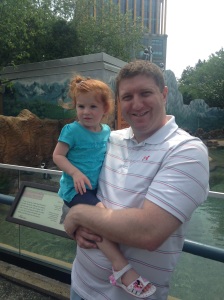 In August 2006 our family held a wedding in Lumberton, NC and that included a reception. That reception was held at Black Water Grille currently called Candy Sue’s located on West Third Street.

Dave Schur is a marketing manager for a company that is located in the Philadelpia area. He like his wife Dottie attended Blomsburg. Dottie and Dave’s wedding anniversary will be one I hope I never forrget since it is June 8th. June 8 is the same date of my wedding anniversary.

Back to the 2006 wedding reception held to in Lumberton, NC. During the reception the DJ played a song that got a lot of the young people in attendance on the dance floor including David Schur. At about midpoint during that song the crowd errupted and the dance floor parted. They parted for a reason, a reason that a sleepy southern town doesn’t see much we had a break dancer on the floor. The entire crowd gathered around the floor and stared in utter disbelief at the choreography David Schur was demonstrating. The dance of choice in Lumberton is the shag or a line dance.

When I see friends that attended that 2006 wedding I get asked about Dave. The question is often framed like this “Dan bless his heart how is that young man that dances on his back”.