One thing I have learned is that good friends have other good friends. This is a series of stories about “friends of my friends”. The post below is the story for August 31, 2015.

One industry that has changed over the past twenty years is the newspaper business. I have a friend James Locklear who is in that profession. James is the Editor/Publisher of Native Visions Magazine. All James does with that business venture is write stories, shoot photographs, sell advertisements, design pages, deliver papers and market publication. Wow!

James has been doing this since August 2005. Prior to 2005 he was a damn good reporter for the Fayetteville Observer for ten years. What he does with Native Visions Magazine is writes about accomplishments and historical achievements of American Indians. If you love history and culture especially about American Indians with a special emphasis on the Lumbee Tribe then this magazine is for you.

A recent story James did was on JoJo Blanks a local Pembroke, NC high school football player who now is enrolled at Virginia Union University in Richmond, VA.

James is in a tough business in fact just a few months ago (April 2015) Fortune Magazine came out with a list of the top 10 worst jobs. The profession of being a newspaper reporter was #1. The jobs were ranked based on the following attributes, with much of the data coming from the US Bureau of Labor Statistics: “income, outlook, environmental factors, stress and physical demands.”  A link to the story is below:

So how is it that a man whom is in the worst profession in the country can do anything wonderful? How is it that in Robeson County (NC) a place that many would say is not a desirable place to live can have neighbors act world-class? My simple answer is a leader’s attitude makes the difference. Not accepting what others say or believe as true is what happened in this story.

When you hear the story of James Locklear and Robeson County neighbors making a difference I challenge you to tell me you are not moved by their attitude and compassion. You might be in a bad situation but attitude can overcome a lot.

James Locklear has a new friend with the name of Tim Adriany and he is dying of cancer. 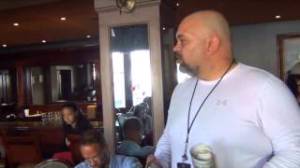 Much of what I am about to tell you was chronicled in two local papers The Robesonian and Fayetteville Observer.

Tim Adriany moved to Parkton, NC a small town in northern part of Robeson County from Oklahoma to be with his now wife Crystal and her daughter, Ashley. The couple met online in 2012 and he made the move to come to North Carolina.Tim, a native New Yorker, is 41; Crystal, who has lived in North Carolina all her life, is 23. Eventually Tim found work as a press operator at the Fayetteville Publishing Co. He continued to work for the company through June 2015. In December 2014 something occurred that changed everything.

Tim sustained a fractured vertebra in his back in a car accident. Medical treatment for that vertebra revealed he had cancer. Initially diagnosed as melanoma, the cancer spread quickly. In February 2015, doctors gave her husband 24 months to live but as the summer progressed his prognosis changed to a much shorter time window. In Tim’s case there was no luck with chemotherapy and radiation.

His next door neighbor “Jo” Coe, a public schools social worker brought him a Sunday Dinner on August 14th. She brought Tim and Crystal a Southern spread of fried chicken, candied yams, herb and garlic green beans, buttered corn and macaroni salad. Tim, who is on oxygen and whose organs are shutting down, ate a little of everything.

Jo knew that he loved cars, and that a member of his church had taken Adriany for a ride in his Corvette. After lunch, he mentioned to her that his dream ride would be in an El Camino.

She contacted James Locklear who used his influence as the editor and publisher of Native Visions magazine in Robeson County about seeing if that dream ride could become a reality. James posted a message on his Facebook page on August 17 see below and what happened next is wonderful.

Tim Adriany got his pick for one last personal ride from about 80 classic automobiles and pickups on August 20th.

The good thing was that Tim didn’t just stop at just one. The video below is good stuff

James Locklear’s profession may be deemed one to avoid if you read Fortune Magazine. Robeson County may get beat up as a not a good place to live by many who don’t know the people.

Watch the video above and tell me how a newspaper reporter doesn’t make a difference and how Robeson County does not care about their neighbors. My bet is you can’t do it.

James Locklear demonstrated he had influence along with a can do attitudes in the worst profession in the world to come help a Robeson County resident.

Seeing how people care was powerful in this situation -don’t ever forget your attitude still matters.