One thing I have learned is that good friends have other good friends. This is a series of stories about “friends of my friends”. The post below is the story for December 25, 2015.

People all over the world are waking up on Christmas Day to the sounds of joyful music, happy and surprised children, and families being together. All of that is true but today is also a time where some people have to go thru this holiday for the first time without someone that they  are deeply connected to. Personally I am going thru that because I lost my sister Bridget Murphy on August 31st.

I also have a friend named John Rancke that I happened to see on December 23rd at Lee Grantham’s Annual Oyster Roast. 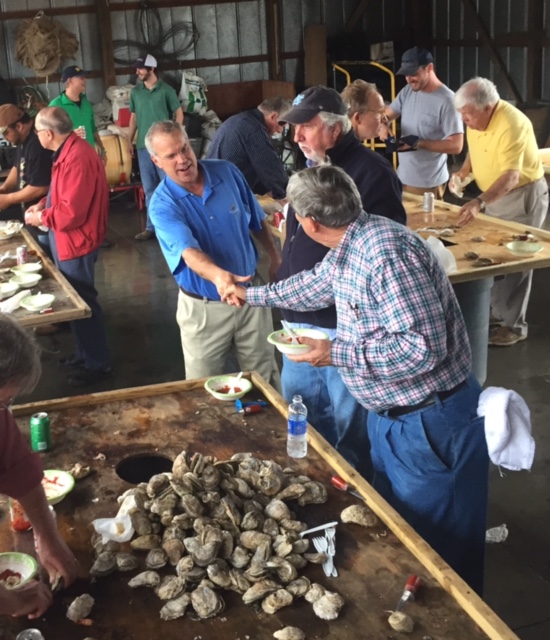 John Rancke is also going thru Christmas having lost special people in his life. I love spending time with John because he and I share a common passion for college basketball and the stories that go with the sport.

John is retired as Recreation Director for the city of Wilmington and has done a lot to support our children over the past thirty years. He also has a connection to an iconic leader from Lumberton, NC named Bill Sapp. Bill was the longtime City of Lumberton Recreation Director and former basketball player at the University of Kansas. The recreation center in Lumberton is named in his honor.

One interesting thing about Bill Sapp is that he was from Augusta, Kansas and played basketball for one season at Duke University in 1945. He transferred after one year and played from Kansas in 1947-1949. He was a starter his last three years at Kansas. Bill played basketball for Phog Allen who was the Head Coach of the Kansas Jayhawks from 1919-1956.

John Rancke Jr. Is a very positive and upbeat leader but he has had his share of personal losses over the past three years. I began to reflect on his life when we drove away from the Oyster Roast on Wednesday. During that drive back into town I started to realize what the past Christmas Holidays have been like for him. He lost his wife Pam in 2012 the day after Christmas, his dad in 2013, and mom in 2014 both of his parents were pillars in the Lumberton community.

John’s wife Pam Byrd Rancke was a loving mom and successful in the banking career for over 25 years before she passed away. John and Pam had a daughter named Lindsey that is married.

His dad John Rancke Sr. was licensed and practiced pharmacy for 64 years with McMillan Drug Store, Hedgpeth’s Pharmacy, North Elm Pharmacy and the Medical Arts Pharmacy. At the time of his death, he was the oldest active pharmacist in the state of North Carolina.

His mom Bonnie “Bunky” Rancke was a lifelong fan of the Lumberton Pirates and the UNC Tarheels. As a college basketball coach I spotted her a few final fours following the UNC Basketball team.

In 2015 John had to experience two more losses of men that mentored him in college Dean Smth and Bill Guthridge.

The Friend of the Friend-BILL GUTHRIDGE

John Rancke served as a basketball manager for The University of North Carolina Basketball Team while he was in college. He won’t hesitate to tell you if you ask him about the leadership lessons he learned why he was associated with the basketball program.

One of the men that he learned from was Bill Guthridge. John often bragged on the discipline and dry wit that Bill possessed. Bill Guthridge is also synomous with loyalty in college basketball circles.

Bill Guthridge came to UNC as an assistant coach in 1967 and served in that role for 31 years. In October 1997 Bill Guthridge became the head Coach when Dean Smith retired after coaching the Tarheels for 36 seasons.

Bill Guthridge served as head  coach for three seasons and led the Tarheels to two final fours in his tenure. Bill passed away in 2015 just a short time after Dean Smith died.

So today on Christmas there is lots of joy but don’t forget there are people that are experiencing the loss of someone important for the first time on this holiday. It also should make all of reflect that the real important gifts today are not the ones under the tree but the time we get to spend time with family, friends, and leaders.

Thinking of you today John Rancke and wishing you a Merry Christmas.