Columbus County sits directly to the east of my home county Robeson. Its population is slightly less than 60,000 and its county seat is Whiteville, NC.

Map of the county is outlined in red.

The county was formed in 1808 in the early federal period from parts of Bladen and Brunswick County. Don’t think it will come as a surprise to learn the county was named in honor of Christopher Columbus.

It has an impressive courthouse. 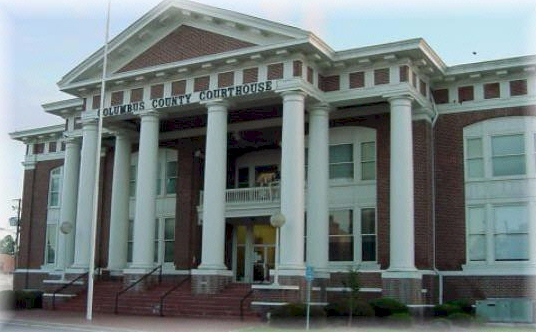 Whiteville and Fair Bluff probably divide honors as the oldest towns in Columbus County. Originally known as White’s Crossing, the town was laid out in 1810 on James B. White’s land, and after he served as the first state senator from the county the name was changed to Whiteville and it was named the county seat. The town of Whiteville was chartered in 1873, and J.A. Maultsby was its first mayor.

Tabor City is also part of Columbus County. Last year I wrote a post about Mr. Horace Carter. He was a Pulitzer Prize winning newspaper editor/publisher for the Tabor City Tribune.