I have watched a few documentaries on my Apple TV the last few nights. It made me ponder what my ancestors did just a 100 years ago and my thoughts turned to the radio. I began to wonder when did the first radio station appear in North Carolina. As I suspected Charlotte or Raleigh would be the birthplace and it was Charlotte.

North Carolina radio began in 1920 with the partnership of Fred W. Laxton of General Electric, Frank L. Bunker of Westinghouse Electric, and Earle J. Gluck with the Charlotte office of Southern Bell; all three were trained in electronics and wished to launch the new technology in the state.

Using various rooms of Laxton’s house and a receiver in a former chicken coop, these pioneers broadcast their amateur signal to an extremely limited range of potential listeners. In 1921, via the U.S. Department of Commerce, they secured the call letters “4 XD” under an “experimental” license. With a commercial license and a new location-the 8th floor of the Independence Building in downtown Charlotte-the trio signed on WBT radio in April 1922, broadcasting four hours a day with a 100-watt signal. 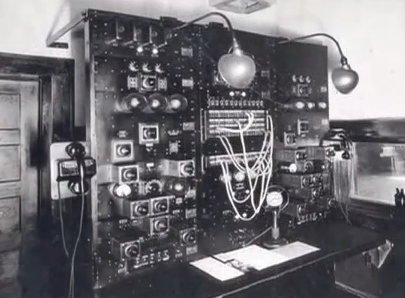 When WBT began it was still an industry that was full of small operations similar to what Laxton, Bunker, and Gluck had started. Things began to change in the late 1920’s. Not long after the birth of commercial radio, corporate broadcasters began scrambling to tap into the newfound commercial options. Fledgling networks such as NBC and CBS began calling for government protection of the airwaves, and as a result many small stations opted for the security and additional programming of the larger corporations. WBT joined CBS in 1929, which, by 1933, increased its power to 50,000 watts, the legal limit at the time.

There is a great link to learn more about North Carolina’s Radio history.