Commencement is a tradition held at just about every college and university in the US, but some schools have very unique rituals that make graduation day unique. At Warren Wilson College located in Swannanoa NC a future hemlock tree is part of the commencement.

Warren Wilson College began as the Asheville Farm School in 1894. The school was founded by the women’s home missions board of the Presbyterian Church, in order to give mountain boys vocational training and classroom study. Initially the school enrolled 25 students in grades one through three. Higher grades were added as enrollment increased, and in 1923 the first high school class was graduated.

In the 1940’s due to a merger the school became a junior college. After graduating its final high school class in 1957, Warren Wilson remained a junior college until 1967, when it became a senior liberal arts college offering a bachelor’s degree. The first seniors in the four-year program were graduated in 1969.

Warren Wilson campus is shown below. 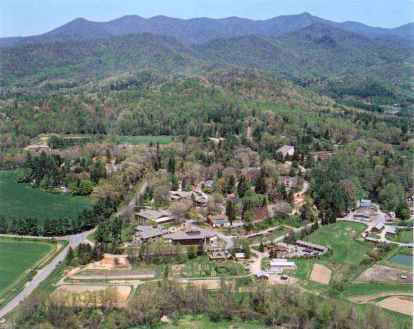 When receiving their diplomas at graduation, Warren Wilson students are also given a tree seedling, usually a hemlock sapling, to plant away from campus.