Name of University: University of Montana-Missoula

There a number of colleges that I have never visited and the University of Montana is one of them. The college is situated in Missoula which is known as the “Garden City” for its dense trees and lush green landscape. Missoula is located in the heart of the northern Rockies of Western Montana.  The area surrounding the university has a population of about 86,000 residents, Missoula lies in a mountain forest setting where five valleys converge, three major rivers flow, and seven wilderness areas are all close by.

Campus as seen from Mt Sentinel.

I do know one person at Montana and that is Colin Bonnicksen who is a former member of the Athletic Department Staff at UNC Pembroke.

Colin is in gold shirt during his UNC Pembroke days when I was the Athletic Director.

Colin is currently the Director of Football Operations at Montana. I wrote about him in July 2015 post.

If you are in to outdoor fitness or being active then Montana’s campus and location has something to offer you.  The campus sits at the base of Mount Sentinel, which includes one of the state’s most popular hiking trails ,and is adjacent to the Clark Fork River. 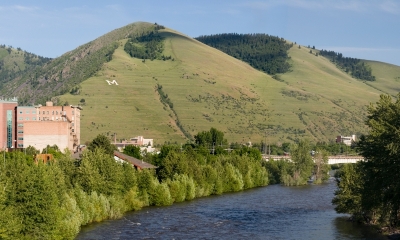 University of Montana has the nickname the Grizzlies and their mascot is named Monte.