Like so many other colleges Northern Arizona University got it start in 1899 as the Northern Arizona Normal School. It had a humble beginning with a president being actively involved in recruiting. The first president Almon Nicholas Taylor literally scoured the Arizona Territory in a horse and buggy trying to sign up students. He succeeded in getting about 20 plus students and was there to present the first 4 graduates diplomas in 1901.

Since Almon Taylor there have been 15 other presidents at Northern Arizona including the current president Rita Hartung Cheng who has been in the role since August 2014.

Dr. Cheng has a little more to do than Almon Taylor and much better resources. At NAU, Dr. Cheng oversees an operating budget of more than $500 million and 4,600 faculty and staff. The university offers more than 200 undergraduate, graduate and professional degree programs to its 29,000 students. Most of those students are served at the Flagstaff campus but there are 34 other locations across Arizona.

Aerial view of the Flagstaff campus of NAU. 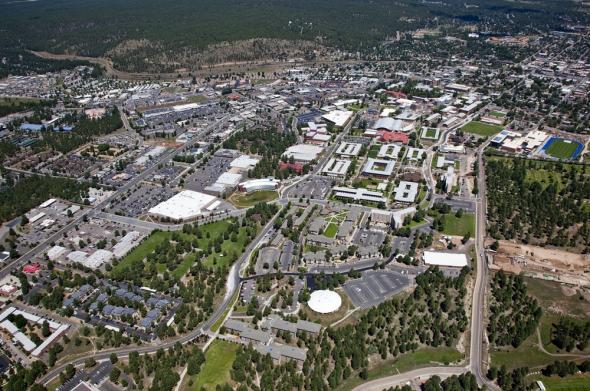 The university has a pretty neat virtual tour on the website.