This is a big weekend for college football rivalries. I will be watching THE GAME between The Ohio State University and Michigan on Saturday amongst fans from both sides.

I wrote a previous post in June on The Ohio State and some of my friends passion for the university.

Ann Arbor was a farm town of only 2,000 people when the university was relocated from Detroit in 1837. The town’s founders, John Allen and Elisha Rumsey, chose the name in honor of their wives — Ann Allen and Mary Ann Rumsey — and to recognize the massive oak trees in the area that created a natural arbor.

Those trees today form so vivid colors in and around University of Michigan’s campus. 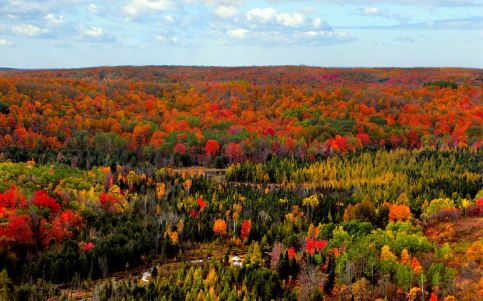 The university is consistently ranked in the top 25 of all universities in the country. Current enrollment for Michigan hovers around 45,000. The football stadium is dubbed “The Big House”.

The first American to walk in space, the creator of the iPod, the co-founder of Google, and the 38th U.S. president are all Michigan alumni.