Originally published February 7, 2015 has been updated.

I have a long friendship with Bob Caton. Today the friendship is linked to a common bond with fantastic people, a great university, our community, and college athletics. In the beginning of our friendship it was about draft beer.

For those that are from Robeson County or have ties to it you know the name Bob Caton. The state of the art football field house at UNC Pembroke is named in his honor. His family name is associated with St. Francis DeSales Church. He has been a generous benefactor to Southeastern Health. I could go on because there is more that he has supported. Bob and his wife Faye have been very good to Robeson County and they are two examples of servant leaders.

UNC Pembroke began playing football in fall 2007. To get to that point the UNCP Board of Trustees had to support it and a Football Advisory Committee needed to be formed to get the sport off the ground. Bob was on board on both counts. Bob Caton has supported UNCP Football from the very beginning and was instrumental in a number of things including hiring our first coach Pete Shinnick.

Bob has many ties to college football. He is a former member of Florida State University’s football team, he is former president of the Seminole Athletic Booster Club (2008-09). On top of that he has a 35-year relationship with UNCP and its athletic programs.  Bob was one of the early supporters of the UNCP Braves Club, UNCP’s athletic booster organization, Caton and his wife, Faye, are lifetime members of the Chancellors Club. They also have established a need-based endowed scholarship for students from Robeson County.

Bob grew up in Miami, Florida and he and Faye, the former Faye Carden of Thomaston Ga., have been married 45 plus years. They have two grown children, Karen Granger, who works at UNCP and a son, Bob Jr., who lives in Atlanta, Ga. They have four adorable grandchildren. Recently they celebrated their 50th Wedding Anniversary. 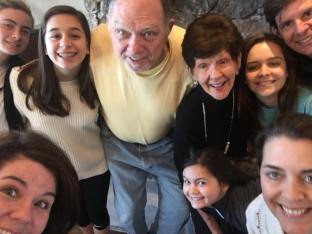 Bob is the former owner of Eagle Distributing Company of Lumberton, NC and that business today is called R.A Jeffreys. When Eagle Distributing opened in 1978, their warehouses distributed Anheuser Busch products in Robeson County, along with Hanson Energy Drinks and Negro-Modello, Corona and Pacifico brands. From its 24,000-square-foot facility, Eagle was one of 30 U.S. distributors serving 30 wholesalers in the Carolinas for Anheuser Busch. The beer business has changed since Bob got started but one thing he always provided was customer service and that is how I first met him because he went the extra mile to serve others.

In 1985 a couple of things were occurring simultaneously. One Robeson County specifically Lumberton was starting to loosen up their rules on beer sales. They were allowing restaurants to serve draft beer. Second my family was moving from Jackson County, NC to Lumberton so I could become the Head Basketball Coach at UNC Pembroke. That move included relocating my second year anniversary gift. That gift from my wife Mira was a homemade kegerator. I didn’t make a lot of money as an Assistant Basketball Coach at WCU but I had lots of friends because of the kegerator.

Before we moved from Cullowhee, NC we reached out to a big Western Carolina University supporter who happened to own the Budweiser Beer Distributorship in Asheville, NC. In Cullowhee we had to find a package store that would sell kegs and go get them and bring them home. A keg is heavy and Mira bribed college students to help lift the keg into the house in exchange for beer tastings.

We asked the Asheville Distributor who we could call and he said let me make a call to a friend of mine in Lumberton. He called Bob Caton and we became one of his earliest draft beer customers.

The reaction to being allowed to sell draft beer in Lumberton was not embraced immediately. Businesses were hesitant because of the fear that the preacher on Sunday might chastise a restaurant’s decision to serve draft beer. Sales were slow at first. In essence kegs were not rolling out of Eagle Distributing the first month of the law

At first I didn’t have direct contact with Bob but his wonderful sales manager Phillip Hamilton. He worked it out where we got the keg delivered to our home. Mira didn’t have to bribed college students with taste testings anymore.

Phillip Hamilton who today is the Vice-President for National Accounts with R.A. Jeffrey’s in Wilmington NC.

The first two weeks we purchased three kegs because of two big parties we were hosting at our house. Usually a keg would last us 4-6 weeks.  Many years later Phillip Hamilton told me a story about Bob Caton conducting a sales review meeting during that two-week period. Bob was super organized and very driven and he wanted sales data on the impact of the law in Robeson County to sell draft beer.

Phillip said when they pulled up the chart the #2 customer listing for Eagle Distributing Keg Sales was Dan & Mira Kenney. Bob wanted to know where our business was located and Phillip told him the story. I am happy to report that Mira and I never made Eagle Distributing # 10 list again but we have Bob on our top 10 list as a great friend.