Learning to Cook from John Holmes

This post was originally published on February 14, 2015 but has been edited and updated

On Saturday night my wife and I hosted our de’facto Lumberton NC Supper Club to our 5th Annual Valentine’s Day Dinner. We had 12 couples participate and each had a specific assignment.

We first got exposed to the concept of Supper Clubs or communal dining when we were parishioners of St. Anne’s Church in Rock Hill SC.

I did a whole blog post on that in 2014 and you can read it at link below:

The big takeaway for me being part of that was getting to learn to cook with a Louisiana flair. I do not profess to be proficient chef but I have mastered a few recipes in large part to John Holmes. John was one of the members of that Rock Hill Supper Club that taught me how to deep fry turkeys.

The first time John taught me how to cook a turkey was part of a celebrity/chef auction. I was the basketball coach at Winthrop University and apparently that qualified me as a celebrity and John was the chef professing to bring authentic Louisiana Cajun Recipes to life at someone else home.

About a month later the Celebrity/Chef Cajun dinner was auctioned off and a sweet older lady was the successful bidder. She received instructions the night of the auction to contact John and she did that. Part of the auction stated that the owner would have to provide some items and that John would inform the bidder what those items were.

The night of the auction dinner John picks me up and we head over to the lady’s house. Her yard is immaculate with neatly trimmed shrubs and freshly cut grass. We go to the door and the lady says to John I have done exactly what you asked. She said the end of the concrete driveway was clear for John to cook on and she had the Louisiana Cooking oil in the cooler on ice as he requested. She went back inside and left us to set up the burner, tables, and other prep items. I asked John since I was a novice what was Louisiana Cooking Oil. He went over to the cooler and there was a case of Dixie Beer on ice.

John tossed me a beer and said the lady asked what he needed to make the meal authentic and John told her that true Cajun Cooking required Louisiana Cooking Oil on each step. He told her about the importance of Dixie Beer in the Cajun Cooking Method. I was howling. I also need to report that not one step of this auction dinner didn’t get prepared without amble Louisiana Cooking Oil.

At the very end of our cooking we were down to our last 2-3 bottles of “cooking oil”. The lady came out and wanted to see the turkey come out of the peanut oil. We had prepared every other aspect of the meal and she had taking it inside to her guests. She was standing on her steps bragging to John how everything so far was wonderful and all of her  guests were truly loving Cajun cooking.

As we lifted the turkey out of the peanut oil with the broom handle the effects of the Louisiana Cooking Oil mixed with peanut oil slightly impacted our coordinated effort to keep the bird balanced. A depiction of the method we used is shown below. 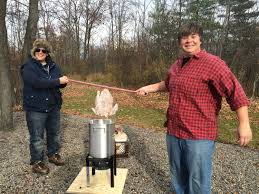 It slipped off the end of the broom handle and landed softly in the fresh cut lawn gently rolling over once. John picked it up and without missing a beat told the woman in an exaggerated Cajun accent “that’s how we garnish a bird in the bayou”.

She took him at his word and we cleaned up and left the dinner. That item never showed up at the Winthrop Auction again. The word about the garnish and cooking oil had gotten around.

I miss John and Mandy Holmes but am glad I still have all their recipes including one we will have tonight.