Three years ago today, the Dean Smith Center was the site of the public memorial service honoring the man for whom the building was named., Dean Edwards Smith. Several weeks earlier there was a very private service for the family, close friends, and the Carolina Basketball Family members. The public memorial was a chance for those fans and admirers around the State to come and say final goodbyes to the native son of Kansas that came East more than 55 years before and never went back to the Midwest. 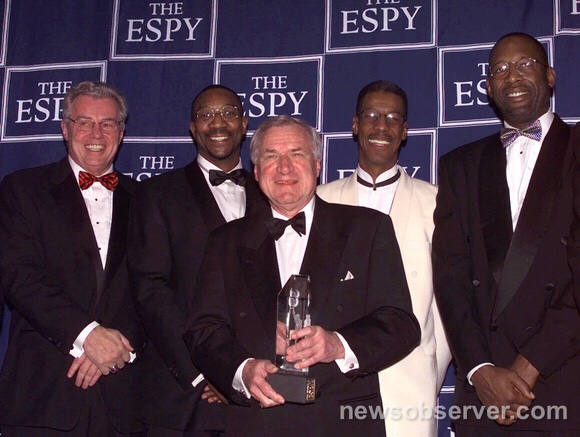 He came to Carolina and was an assistant under Frank McGuire after Coach McGuire’s 57 team defeated Kansas University for the NCAA crown. McGuire left several years later for the NBA and under the hint of a point shaving scandal involving Lou Brown and Doug Moe ( later exonerated after being banned by the NBA for not mentioning he had been contacted by fixers).

Coach Smith was hired to run a clean program and rebuild the image of the Carolina basketball program. He was not hired to win Championships, but he ended up doing so, and he did it his way. Three years into his head coaching career, the team returned on the bus from a loss in Winston Salem , arriving back on campus to be met by the sight of their head coach being burned in effigy outside of the gym. Led by future Basketball HOF member, Billy Cunningham, the fire was extinguished and the Coach survived to continue to build his program.

The history of his success over the years has been well documented and I will not go into it. I will say that the notion that Coach Smith and his 4 corner offense slowed down the game of basketball, the stats refute it entirely. The teams in the late 60s and into the middle 70s averaged 80-85 ppg with no 3 point shot, no shot clock, and less timeouts per game than games played today. They also shot better than 50% from the field for more than 15 seasons in a row and there was no dunk allowed.

The lowest scoring team at Carolina during the entire coaching career of Dean Smith was the NCAA Championship team of 1982, that only averaged 62 ppg, with Michael Jordan, Sam Perkins, and James Worthy all future NBA All Stars in the lineup. The teams in 67-68-69-70-71-72-73-74-75-76-77 all averaged 15-20 points greater and used the 4 corner offense to get the good shots Coach Smith cherished.

Coach Smith and his long time assistant, Bill Guthridge, were both math majors. Everything was based on math in his offensive and defensive schemes. Give the open shot to the opponent with the worst fg percentage. Allow the offensive player to drive the baseline and use the baseline as an additional defender as opposed to the commonly accepted strategy of turn the ball back into the middle and never give up the baseline. 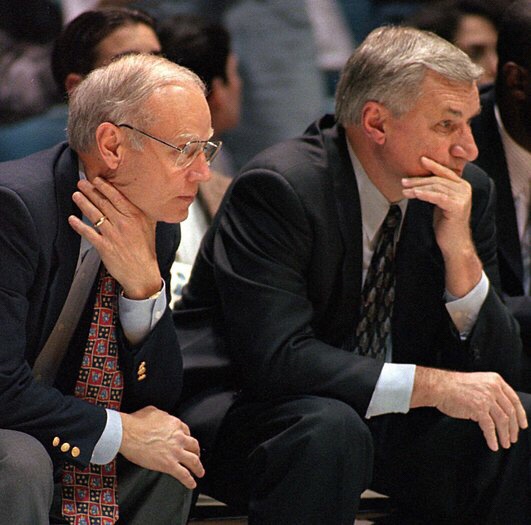 We know about Coach Smith and his efforts for equality across the South. His well documented story of integrating the Pines Restaurant in Chapel Hill with Charles Scott. His practices with the teams at Central prison in Raleigh. His ability to treat everyone the same. His disciplined teams and his saying that the only free man is a disciplined man. 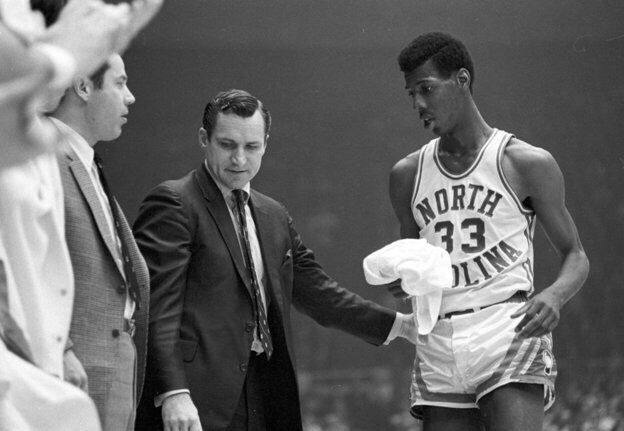 Growing up in Lumberton, NC at the Recreation Department I fell under the guidance of Bill Sapp, a native of Kansas. Mr Sapp played one year of basketball at that school in Durham (and is one of only 3 freshmen there to lead the Blue Devils in scoring for a season) before returning to Kansas and playing for the Jayhawks. Mr. Sapp stressed fair play, sportsmanship, do the right thing, and all kinds of stuff a bunch of snotty nosed kids didn’t always agree with. In the early 60s, Coach Smith and his assistant Ken Rosemond came to Lumberton and spoke at the All Sports Banquet which I wrote about in a January blog entry on Pete Dawkins from West Point. 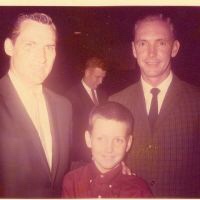 The picture above is of Coach Smith and I around the age of 9-10. If I had only known the whole story, I would truly treasure a picture of Coach Smith, Bill Sapp, and myself. But no such luck, For I found out my freshman year at Carolina when I was having a conversation with Coach Smith just how their lives were intertwined. It seems that when Bill Sapp came back to Kansas to play for the Jayhawks, Coach Smith was a high school sophomore playing on his dad’s high school team. The Kansas player that he looked up to the most and tried to emulate was Bill Sapp. Small world.

I could write on Coach Smith for the rest of 2018 but I’m going to be brief. I will give you some links at the end if you care to read more about the man

But I want to share 2 stories that I think of often, especially after the past 7 years of turmoil and accusations by many of the academic scandal at Carolina and how it was supposedly all started by Dean Smith.

Many of you know I was a student manager involved with the basketball program under Coach Smith from 1972-75. In 1975 I was the senior head manager and was lucky enough to sit one chair over from Coach Smith during every game for the entire season. I also attended almost every Varsity practice for 4 years. I have never heard a word of profanity out of his mouth. He would get on officials but usually after the controversial play was past and at a time that the spectators weren’t watching the bench and the official standing in front of it. Never embarrass a player or official. 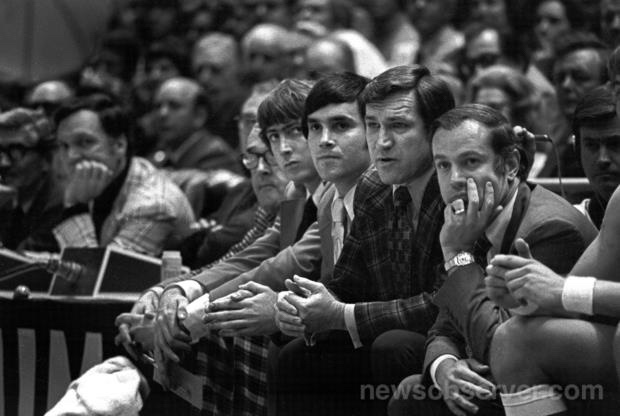 Ok, the stories I leave you with. In the fall of 1975 , the official travel blazer and pants arrived for each player, manager, and Coach. NCAA rules at that time allowed a blazer and slacks. The company that provided the clothes also included a pretty navy tie to be worn with the blazer and slacks on road trips. I received a call from the basketball office a couple of days after the clothes were distributed to each player. Coach Guthridge instructed me that at the first game I was to pass out the post game meal money which consisted of 6 dollars to each player as allowed by the NCAA. But I was to then return to each player on the bus and collect 6.00 from them immediately to be turned into the basketball office the next morning along with their signature on a piece of paper stating they were paying for their tie. All to stay clean with the NCAA.

Classroom attendance was also checked by the coaching staff daily including some managers that were less than perfect. Miss class, you run. Nothing was left to chance and nothing was too small to overlook in their eyes.

Thanks for the pass Coach 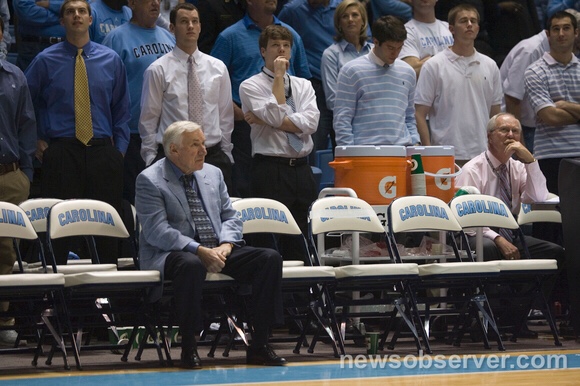