In 1998 my family was making the move to Lumberton, NC from Rock Hill, SC. We had five children in ages from 11 months to 17. We needed to find a suitable house. My wife was fixated on building a new house. I had my eye on a house located on historic Elm Street in Lumberton.

Eventually my wife’s good friend Carol Mozingo persuaded her to look at the house on Elm which was just a couple blocks from her house on the corner of 16th and Elm. My wife agreed and it caused Linda Metzger to enter our lives as our real estate agent. Linda and her husband Don Metzger today are great friend along with being someone who my wife works for and with at Century 21 in Lumberton.

We purchased that historic house on Elm Street in 1998 and two weeks ago I did a blog post on our home depicted below.

Linda and Don Metzger are great examples of servant leaders. Each of them has been wonderful not only to us but our community and especially higher education. Don currently serves on the UNC Pembroke Board of Trustees. Linda not to be out done has previously served on the Robeson Community College Board of Trustees. The key word with both of them is service. Don has also served in the past as Councilman for the city of Lumberton.
Linda has been a dynamic supporter of Boy Scouts for a long time. She is very active in her church First Presbyterian of Lumberton, NC. She takes an active role in politics and serves on the Robeson County Republican Committee. If there is a community fundraising event you likely will see Linda Metzger as part of it. In 2014 she was one of the featured dancers in the “Robeson County Dancing with the Stars” event. She and her husband have also been big supporters of our local hospital “Southeastern Health”.

If that wasn’t enough Linda is also someone who is very committed to fitness. If you are driving thru her neighborhood at dawn she is often seen walking very briskly with friends. Linda is also very proud of her family and her grandchildren. With her and Don Christmas celebrations with both of their extended families is quite a large group.
Linda also has a rich family history with the state of North Carolina. Her brother Rusty Carter is currently the President of Atlantic Packaging located with offices around the country and world. In nearly 70 years, Atlantic has evolved as the market leader in industrial packaging and in customized converted products. This company was started by Linda’s dad-Horace Carter.

I got to meet Horace Carter one time before he passed away on Sunday September 20, 2009. When he died he was 88. His place in North Carolina history is very significant.

Horace Carter graduated from UNC School of Journalism and in 1946 moved to Tabor City, NC. Carter accepted a job as the industrial recruiter for Tabor City, with the added commitment to start a newspaper. He attacked both challenges with zeal, but quickly faced an unexpected foe in the hooded faces of the Ku Klux Klan. Atlantic Publishing began as a small town weekly newspaper, called the Tabor City Tribune. 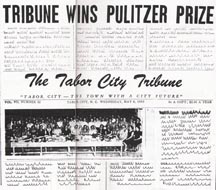 On July 22, 1950, a Saturday, the Ku Klux Klan staged a parade, cars full of armed and hooded men, through Tabor City, on the border between North and South Carolina. Though without violence, the event was ominous, heralding a Klan recruiting drive in the area. Mr. Carter, the editor of The Tabor City Tribune, a weekly paper he had founded four years earlier, responded immediately. For the next issue, dated July 26, he composed a stern column of opinion under the headline: “An Editorial: No Excuse for KKK.”
A two-year campaign of editorials brought financial boycotts of his small paper, death threats and vandalism toward Carter and his family, but he emerged victorious. His efforts exposed the Klan and sent scores to prison. Those battles also were the start of Atlantic Packaging. Today that company has a strong presence across North Carolina and in the world.
For his bravery and community service, the Tabor City Tribune and Horace Carter were awarded the Pulitzer Prize. In 1953, Ernest Hemingway received a Pulitzer Prize for his monumental work The Old Man and the Sea. That same year, the Pulitzer committee also awarded a prize to 32-year-old UNC graduate Horace Carter, editor of the Tabor City Tribune (NC), who was in the middle of a real-life struggle with the Ku Klux Klan in his small town.

In the 1960’s Atlantic’s newspaper publishing was expanded into printing, paper converting, and office products distribution. In the 1970’s industrial supplies were added to Atlantic’s product offering in order to serve the textile industry migration into the southeast. Linda’s brother, Rusty, joined the business full-time in 1971 and began a greater emphasis on industrial markets.
Today Atlantic has a 65,000 sq. ft. facility in Tabor City, NC that gives the company a strong digital emphasis and a significant folding carton capability.
Horace Carter left newspapering in the 1970s, moving to Cross Creek, Fla., where he fished and wrote books and articles about the outdoors. But in the early 1990s, he returned to Tabor City and went back to The Tribune, continuing to write and edit the paper until just before his death. Prior to his passing he was approached about having a documentary film done on his battle with the KKK. The film would be called “The Editor and the Dragon: A North Carolina Journalist takes on the Ku Klux Klan”

Filmmakers Martin M. Clark and Walter E. Campbell interviewed Horace Carter in 2003 and 2006. The production is narrated by Morgan Freeman and presented by Memory Lane Productions and The Center for the Study of the American South. The film debuted in 2013 and often appears on PBS.
Horace Carter was a man who wasn’t afraid to get involved. That admirable quality is also something his daughter Linda Carter Metzger and her husband Don Metzger possess.