I started the Coach4aday blog in 2014 and have done daily posts on one topic for each year. In 2014 my daily posts were on the “Beer of the Day”, 2015 it was “A Friend of a Friend”, 2016 I wrote about “North Carolina”, and in 2017 it was “Colleges and Universities”.
The one consistent piece of feedback I have received with this blog is the 2015 series on “A Friend of a Friend”. Readers and blog followers said please bring it back. The stats also back that up with the number of views each of those posts received.
So in 2018 two things will happen with the Coach4aday blog; One I plan to collaborate with a friend named John Rancke and revisit some of those 2015 “A Friend of a Friend” posts and do some new ones with a slightly different twist. I write the posts on odd-numbered days each month and John handles the even-numbered days.
In addition John and I will write about things we both are interested which will include basketball, food, people, music, our granddaughters, and great stories.
If you want to follow the blog via email go to the bottom right of the post and click the follow button.
My twitter handle is @coach4aday2 if you want to follow the blog that way.
John’s twitter handle is @johnrancke if you want to reach out to him.

For many years starting in the early 60s, my parents John and Bunky Rancke would journey by car to Augusta to spend 4 days at the Masters. On each of those trips they were joined By Clyde “Goat” Hatcher and his wife Louise. Bunky and Louise were golfing buddies at Pinecrest Country Club and played together many times. 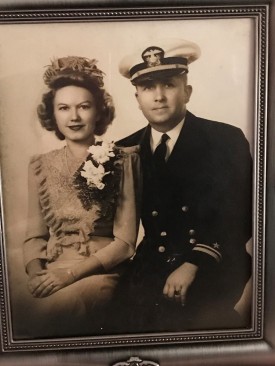 In fact if I remember correctly my mother’s golf bag held several of Mrs. Hatcher’s old clubs that Louise had given my mother. I do know my mother went many years using old clubs from her golfing buddies until she finally bought a set of new ones. But it was years before she would spend that money. I think she had rather save the money for trips to games and gas. But she could play golf with those mismatched clubs!

“Goat” Hatcher was the old football coach at Lumberton High School many years ago and Coach Finley Read will tell you today that the reason he came to Lumberton to coach with Mr. Brooks ( I use Mr. rather than Coach as a tip of my hat to Coach Read who often called Coach Brooks Mr.) was the afternoon he spent riding around Lumberton with “Goat” Hatcher. He convinced Coach Read that Lumberton was the place to put down roots and raise a family. Sixty years later we are thankful for the afternoon “Goat” the former football coach showed a young Wolfpack footballer the city of Lumberton. And as luck would have it, “Goat” helped persuade the Coach that would later coach his and Louise’s son “Little Goat” in JV Basketball and varsity football.

So my parents and the Hatchers go to Augusta each year when the tournament was much easier to acquire tickets. Way back then, the players would drive their cars into the parking lot and many would precede to change into their golf shoes sitting on the back of the car just like many of us weekend golfers do. 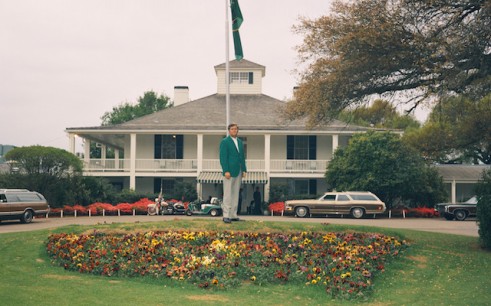 The fans roamed around and would talk with the golfers as they prepared for their tee time. I can remember all the pictures my parents brought back of Arnie and Gary Player, Jack Nicklaus, Julius Boros, Doug Sanders, and many more. We had the pictures made into slides and had boxes of them including vacation trips, Easter Sunday best, ballgames, etc. I had decided that I was going to take all the slides and convert them to digital format as a Christmas present to my parents years ago. Unfortunately, the slides had faded and yellowed so bad it was impossible to see anything. So no pictures to post of the Augusta parking lot locker room!

There was a golfer there that always wore a straw hat. He won the annual tournament in Greensboro many times. His name was Sam Snead. His golf swing is still discussed today by many when naming the “sweetest” golf swings of all time. Effortless and such tempo. Just a natural turning of the body and follow through. I often wonder if my mother patterned her swing after Snead. 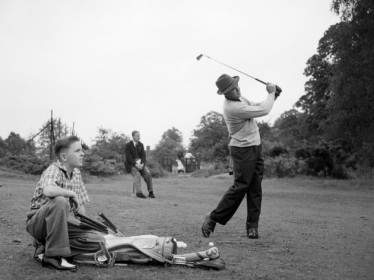 “Slammin’ Sam” was born Samuel Jackson Snead in Hot Springs, Virginia on May 27, 1912. He was raised on the family farm near the small town of Ashwood. Squirrel hunting was part of rural life for a Virginia farm boy. Snead was an all around athlete throughout his high school years playing football, basketball, baseball, and making the track team. He also is said to have practiced golf with a crooked stick and smooth stones he picked up in his wanderings. His real introduction to the game that was to so impact his life, however, was as a 15-year-old caddy (some say he was 11) for a Hot Springs golf course near his home. The course was The Homestead; the barefoot Snead and some of his friends would walk there in the hope of making some spending money. From 1942-1944 he served in the US Navy. 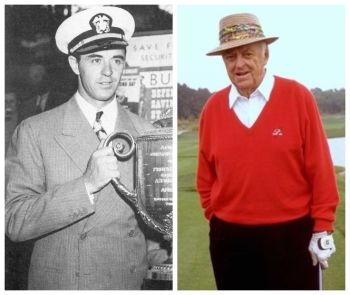 So every year the foursome from Lumberton spends time with Sam Snead, usually having lunch either before or after he played his round of golf. Turns out there was a connection between “Goat” and Sam Snead. “Goat “Hatcher was Sam Snead’s commanding officer in the US Navy and they were stationed together in San Francisco. Old friendships are the best and “Goat” and Sam were good friends and remained so for many years.

I often wonder why my parents stopped going to Augusta each year. I could have gotten their tickets passed down in their will. Thank goodness for high definition and the 65 “ screen.