A lot of us have tried to make scrambled eggs and cheese at home on the top of the stove. It can’t be that hard. But they never turn out like those that you and I eat at the Waffle House. Only two ingredients and they never taste the same.

We have tried tearing the cheese into little pieces. Putting the entire slice of cheese on top of the eggs. Just throwing the eggs and cheese in the pan together. But they never blend like Waffle House. 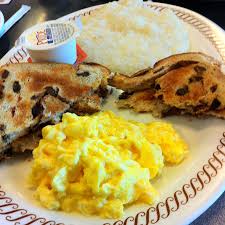 Over the years I’ve visited a lot of Waffle Houses. All hours of the day and night. It’s amazing what you can learn at 1 am on a Tuesday morning when you are sitting at the counter and it’s just 1 waitress and the cook. So I asked the question. “Show me how to make scrambled eggs and cheese”.

First you don’t beat the eggs very much at all. You don’t add milk. Just put 2 eggs in a bowl and give them a couple of turns around the circumference of the bowl. Then you pour them into an aluminum frying pan. Don’t set the temperature too high. Next take a slice of American cheese. Not that cheese food mess. It doesn’t melt and blend because it’s not real cheese. I use deli slices of American cheese. Put the cheese into a small cast iron frying pan. One of the small ones. You’ve seen them use it at Waffle House. You can buy them at any kitchen store. Let the cheese slowly begin to melt. Take a spoon and move the eggs around the aluminum pan and beat slowly a couple of turns. As the eggs solidify take them out of the aluminum pan and place them into the cast iron pan with the cheese on the bottom. Take your spoon and begin mixing the two together. The eggs complete their cooking and the cheese blends into the eggs.

That’s it! I can’t cook anything but after a couple of trials. I can cook Waffle House scrambled eggs and cheese.

Short sweet and informative! You should go and study the way the cook knows what to cook without ever seeing the waitresses order form. There is a system and it’s amazing to watch a cook working on 4-5 different orders all at the same time. I think that is called a teaser1 So enough. I got to have something to write about this fall!!

PS: This is the first blog entry I have written that spell check didn’t kick back to me.