In addition John and I will write about things we both are interested which will include basketball, food, people, music, our granddaughters, and great stories.
If you want to follow the blog via email go to the bottom right of the post and click the follow button.

My wife’s brother and sister-in-law live on Lake Marion in Summerton SC.

The closest town to them is Manning SC. Manning is home to a really good barbecue restaurant called D&H Barbecue. 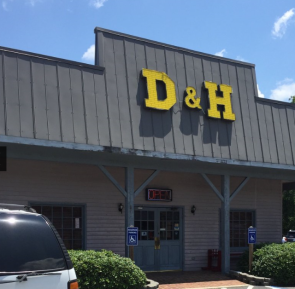 D&H is more than a barbecue joint it can best be describes as my John Tanner says as a Meat and Three. If you travel I-95 Manning SC is located about halfway between GA and NC. It is not far off the Interstate and makes a great place for lunch if you can drive with a food coma if you take in their buffet. Great people, great prices, and great fresh food.

D&H consistently gets high marks for its barbecue, fried chicken, cole slaw, and hush puppies. On Tuesdays and Saturday nights from 5-8:00 p.m. they have a seafood buffet for $9.99.

Follow coach4aday on WordPress.com
A Unique Title For Me

ABC of Health and Wellness