Bucket list item: College World Series 2018. Met an old college friend named Larry Williams a couple of months ago at Keaton’s Chicken just outside Mocksville and Statesville. Hadn’t seen him in 40 years. Lived on the same floor and dorm at Carolina. He hung out with the basketball team and was usually included in everything we did. We called him a recruit.

Found out he has season baseball tickets and wants to go to Omaha.

So we make plans after Heels win Super Regional. Plane flight out of RDU to New York to Omaha a week ago this past Friday. Hoping to stay until Thursday June 28 if Heels keep playing. 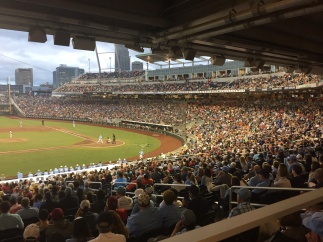 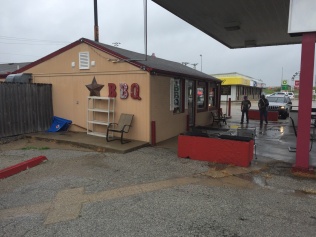 Spent some time with old friends Judy and Jimmy Autry from Red Springs long ago and Southern National bank.

Introduced Larry to Greg Cauley from the swamps just east of Kinston. Greg drove out alone and was headed to the Badlands of South Dakota when we last saw him after the game on Wednesday night. Greg has seen 498 or so consecutive home basketball games in Carmichael and the Smith Center. I can’t remember the number of football games.

We win 1 and lose 2 so looking to come home early. No flights out of Omaha to anywhere on the east coast that is within driving distance with a rental car to Chapel Hill. So we decide to drive home. Only 1290 miles.

Pulled out Thursday mid-morning and drove to Nashville Tennessee including a stop for bbq ribs and bbq burnt ends in Kansas City for late lunch then fat and sassy we head homeward. Timed the traffic just right and with just one short traffic jam getting into Asheville, it was smooth sailing.

Even called former team mate Brad Hoffman as we entered Hickory to surprise him with Larry’s voice. It had been 32 years since they last talked in the dressing room at the Smith Center. Couldn’t meet up but will in August when Brad is in Chapel Hill for basketball Letterman Weekend.

Got into RDU airport to return the car around 6. Great trip, too many laughs about old friends, Granville Towers East girls, slinging water balloons off the stairwells of Granville West onto cars at Hardees and into the PIKA basketball court 300 yards away.

But we did stop off in Lexington and grab some bbq and red slaw before returning the car. I was driving and the steering wheel just automatically turned into the Honey Monk. Grabbed a few fried pies too.

One of the best weeks of my life. But glad to be home. Making plans to go see my first Charlotte Hornets game now that Mitch Kupchak is the GM. After all Larry was the lead recruiter for Mitch back in 1972.

Larry also spent some years in Florida working for the State Prison System. Got the scoop on one of his inmates by the name of Ted Bundy. You may have heard of him.

Sure feels good to get off motel beds after a week.