Not really true. Here is another version of the story about the creation of “China Grove”

The Song on You Tube

Kids this ain’t Justin Beiber music. Just warning you. Roll the windows down or put the top down and go cruising down a two lane road. Let it all out!!

But there some truth in China Grove and it isn’t Chicago Bears Quarterback Mitch “ The Truth “ Trubisky unless he is in town eating some of famous BBQ pig from Gary’s.

Located just off I-85, it’s become one of my favorite stopping points for Q. It’s not The Honey Monk off Business 85 in Lexington but it is worth the visit.

The BBQ is lean, moist and tender, medium chopped, and the sauce is a little more Eastern than most Lexington style sauces, and has some heat. They do serve a good size portion here, so you get your money’s worth. 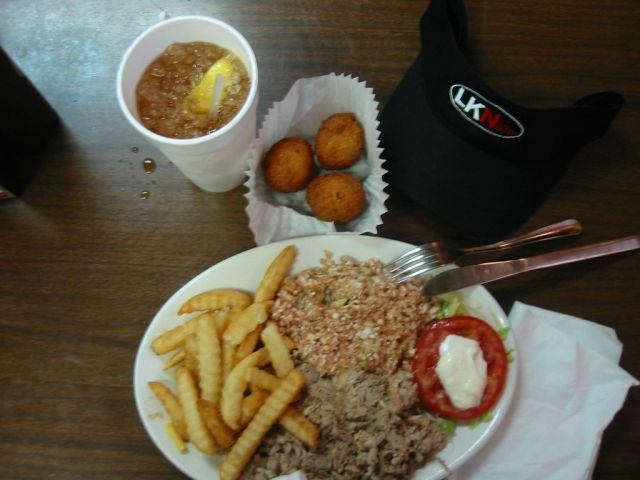 The slaw is a tangy, red slaw that does go very well on a sandwich with the pork served here – much more so than most of the red slaw I’ve tasted. Hush puppies are decent, but not spectacular.

This is not a bad place to eat NC BBQ, especially if you tastes run more toward the Eastern version.

The vintage signs of days past cover the walls of the restaurant and there are several old vehicles inside that you can check out. Well worth a stop for lunch (except Sundays).

They even have a picture of Jay Silverheels (Tonto on the Lone Ranger) son ,Steve who worked with me in Wilmington at the City of Wilmington mail room.