My 65th birthday was yesterday, September 29. Five years ago on the same date (except it was 2013 not 2018) I turned 60. Per the City of Wilmington regulations on retirement, when I attained the age of 60 I could retire with health insurance partially paid by the City until I reached the age of 65 when Medicare would kick in. So on September 30, 2013 I retired.

It was not easy getting to September 30 and being able to walk away. 18 months earlier I had no intention of ever quitting work. I loved my job running athletics, Senior Games, Swimming Pools, and assisting my fellow staff members when they needed help (I lined up the floats for the Christmas Parade, helped with traffic on the 4th of July, dressed up in a Tigger Costume for the preschoolers at our Fit For Fun Center, Special Olympics and countless other odd jobs).

We had just built a new 5 field softball/baseball complex adjacent to I40 just north of town. We had built a new tennis facility one block north of Independence Mall and honored tennis great Althea Gibson by naming it for her. We were building a cross city walking trail that would enable residents to safely walk from downtown to Wrightsville Beach. 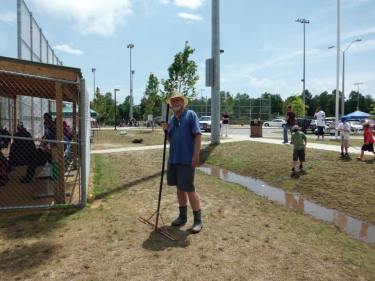 But things changed in April of 2012 when my late wife Pam was diagnosed with small cell inoperable cancer in her lung, liver, and spine. I was able to work my way through each day and come home to her with good and bad days. 8 months later she passed away on December 26, 2012. I lost a wife and gained a precious granddaughter. Ayden Caroline Chadwick was born on August 13, 2012.

So, after some time off from work in January, I returned to the City in February but my fire was gone. That late winter and early spring was extremely difficult as I tried to get through every day and night on the ball-field. I was always able to lose myself and enjoy being with the adult softball crowd for years. Listen to complaints, discuss, suggest, and then just the general conversation at the ballpark. But not anymore!

I ran out of gas that spring. I was a 747 high in the sky and my fuel tanks were empty and the runway was months away (Sept 30). But I had a large crew of co-pilots to assist me in getting the plane home.

My co-workers and former co-workers ! I have never really thanked them for putting me on their backs and carrying me for those long difficult work. They took over some of my responsibilities, brought me back into the main office rather than being isolated at the office at the softball complex, include me in their activities, and just be there sitting across from my desk talking.

To each of you I owe my life, my sanity, my being. I am a very fortunate and such a lucky man to have such work buddies and friends. I will never forget what you gave me!