Today post is written by Keith Parsons. Keith inspires me because he realized and more important acted on the statement “it is never too late to pursue your dream”. He also visualized what his life would be like if he won the LOTTERY.

I first became acquainted with Keith thru his father Benny Parsons. His dad was a former NASCAR Driver. He won the 1975 Daytona 500 and 1973 NASCAR Championship. He was voted into the NASCAR Hall of Fame. 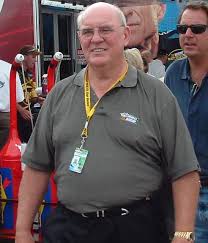 After his racing career ended he became an announcer for NASCAR races on a variety of networks including ABC, ESPN, and TBS.

While I was coaching at Winthrop in the 1990’s I met Benny at a function in the Charlotte NC area and he asked a favor of me. Benny had two sons Kevin and Keith (picture below is of Keith).

Benny believed Keith’s passion in life was coaching basketball. If my memory serves me correct at that point in Keith’s life he was an AP writer. He was thinking of exploring coaching and Benny wanted me to encourage him and put a plug in at UNC Pembroke. I did both but the timing wasn’t right. Keith went on to become a banker eventually landing in Richmond County NC.

While he was in Richmond County he found a way to coach basketball. His guest post is about visualizing how winning the LOTTERY could change his life.

Several years ago, a friend and I were at lunch, discussing what we would do if we won the lottery. The jackpot had reached an astronomical amount at the time, so fantasizing about becoming rich instantly seemed to be the thing to do.

I explained I would do what I could to find a job teaching and coaching basketball in the public school system of North Carolina. Over the years, I often had regretted the fact I didn’t follow that path earlier in life, and my love for the game and my desire to make an impact on young people’s lives had stayed with me.

“You know, they say however you answer that question, you should find a way to that,” my friend told me.

Spoiler alert: I didn’t win the lottery. And more than 30 years after I left as a graduate, I have returned to Richmond Senior High School in Rockingham, N.C., as a Social Studies teacher and girls’ and boys’ golf coach.

I also was able to find a position coaching boys’ basketball at one of the middle schools in our county, Hamlet Middle.

The time as flown by during my first year as an educator, as everyone told me it would. It is so hard to believe school almost is over, and the carefree days of summer vacation are calling my name. Yet I will miss these students who have become a part of my life over the past nine months.

Every day, particularly as our time together dwindles, something happens to remind me why I made this life change at 49 years old.

In short, they need a teacher. I’m proud to say that is me. Thinking like I won the LOTTERY made my life richer.