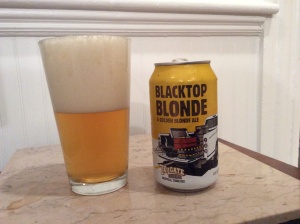 I am excited that on Saturday I am going to get to tailgate and watch a Southeastern Conference (SEC) football game at Auburn, AL. Auburn  University will be hosting Louisiana Tech the alma mater of Terry Bradshaw-Pittsburgh Steelers QB and Fox TV Analyst.

I am really excited to be making this road trip with 7 great friends and my wife. My hunch is the tailgating will probably trump the game itself. I was looking for tailgating beer and I think I found it Blacktop Blonde from Tailgate Beer.

The owner/founder of Tailgate Beer is Wesley Keegan. Who was a happily satisfied laid-back San Diego bar owner and homebrewer when his father approached him with an idea. The elder Keegan had trademarked a brand name and logo for a new brand of beer that was called TAILGATE BEER. “Make this into a company,” he urged his son, and in 2007, Tailgate Beer was born.

The Tailgate Beer I selected was Blacktop Blonde. It is a golden ale that I honestly have to say is just a fair beer. The company in Nashville, TN. I got the beer from Alan and Julie Fowlkes who put together the trip to Auburn. I promise my tailgating experience will be better with them than this Blacktop Blonde. 5% ABV and add to the “One and Done Club”