Today in North Carolina you don’t have to drive far to locate a McDonald’s. I got wondering about the first McDonald’s in the state.

On September 30, 1959, the first McDonald’s Restaurant in North Carolina opened at 1101 Summit Avenue, at the intersection of Bessemer Avenue, in East Greensboro. Here is a photo of the store, still in the same location, 57 years later.

This store was opened by two WWII veterans back when the chain had less than 500 stores and hamburgers were a mere 15 cents. 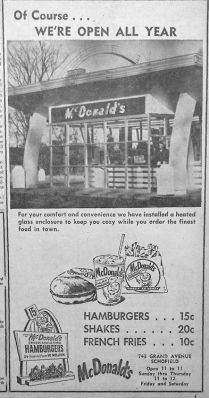 In 2014 there were 475 McDonalds in the state of North Carolina. I am sure today that number surpasses 500.